"I am just a poor boy
Though my story's seldom told"
Paul Simon - The Boxer.

This Site is still under construction!

John Wesley Hackworth says of himself
"I saw the Stockton and Darlington railway opened, was brought up upon it, knew every horse, and driver, every locomotive driver, and fireman, every director, nearly all the shareholders, and every noteworthy incident that occured thereon for the first 20 years; and if any living man knows anything of its history, and working, I am the man!"


Samuel Holmes - a grandson of Timothy Hackworth wrote, in the 1920's,
"It is hoped that Mr Albert Hackworth (the son of John Wesley Hackworth and grandson of Timothy Hackworth), who established the Worth Engineering works of Toronto, Canada, will write the interesting life and history of John Wesley Hackworth, which ought to be given to the world, as he has a great mass of papers,letters, and much detailed information bearing up on the subject."


Albert Hackworth never got time to produce such a work on his father but Robert Young added a chapter on John Wesley Hackworth to his book, and this website has used that as a basis from which to build his story. John's papers, that Samuel referred to, are now in the Hackworth Family archives housed at NRM in York HERE. It's not possible for me to go through them all at the present time, maybe, at some stage, someone will produce a book using the archives and one that will give a balanced view of John Wesley Hackworth. Until then this smaller work will have to suffice.


John Wesley Hackworth was an engineer and inventor and the son of Railway pioneer Timothy Hackworth, who, at the age of 16, on behalf of his father, led a team of engineers on a dangerous journey through the ice-clogged Baltic to deliver the first railway locomotive, built by Timothy, to the Tsar of Russia and came back with a long Russian beard and a Russian passport!

You won't find much about John Wesley Hackworth on the internet and not much more in books. To those who do know his name, he cuts a controversial figure for his detailed defence of his father's reputation after the publication of The Life of George Stephenson by Samuel Smiles 1857. Few know his whole story, just a few choice-cut-phrases that are far from flattering.

The purpose of this site is to address this situation to the best of my ability with the resources available. Along the way, I will tackle some of the difficult areas of his life, in particular the issue of 'Who Invented the Steam Blast' or 'Locomotive Blast Pipe'. It's a controversial area that will probably never be solved to the satisfaction of everyone but it's impossible to write about John's life without some deliberation on the issue. Hopefully this site will be a resource and an interesting read not only for those interested in Locomotive history but to people in general.

The best description of John Wesley Hackworth's life is from a chapter in Robert Young's Timothy Hackworth and the Locomotive first published in 1923 and revised in 2000 by Ulick Loring and Jane Hackworth Young (to whom I am thankful to for advice and additional material). I've taken this basic outline of his life and broken it up into posts and illustrated it with added material where possible. As it's a website rather than a book, I will be able to add into it or revise it as needs be.

Why am I doing this? Although I'm not a descendent of Timothy Hackworth, my sons and ex-partner are. Joan Hackworth Weir, the grandma and a cousin of Jane Hackworth Young, left a case of Hackworth archives and a painting of John Wesley Hackworth. The archives are now on line here and the painting is in the care of NRM Locomotion at Shildon. My sons saw the painting and asked me who he was! I set about finding out and this is the result....! 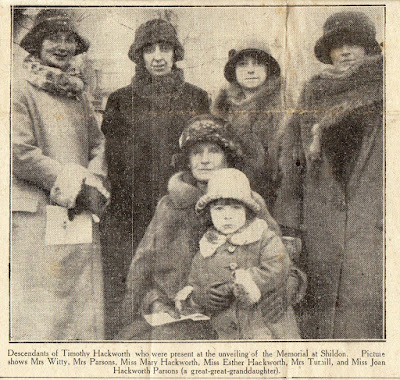 Joan Hackworth Weir as a 5 year old (bottom /centre) with the Hackworth family at the 1925 centenary of the Stockton and Darlington Railway. Photo from the Northern Echo. 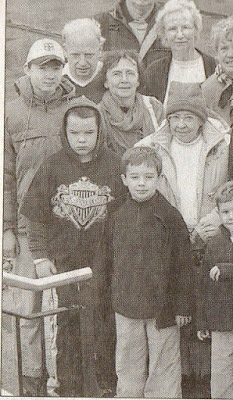 Above, Joan Hackworth Weir (nee Parsons) in her 80's (right with hat and glasses),with Jane Hackworth Young (right), myself, Trev Teasdel and some of the Hackworth Grandsons, Kyle and Kristian Teasdel, from the Northern Echo 2005 when Joan presented to NRM the 'Blast Pipe letters' to Timothy Hackworth from George and Robert Stephenson, long held by the Hackworth family.

This site will cover the main aspects of John Wesley Hackworth's life to the extent that i have material available. 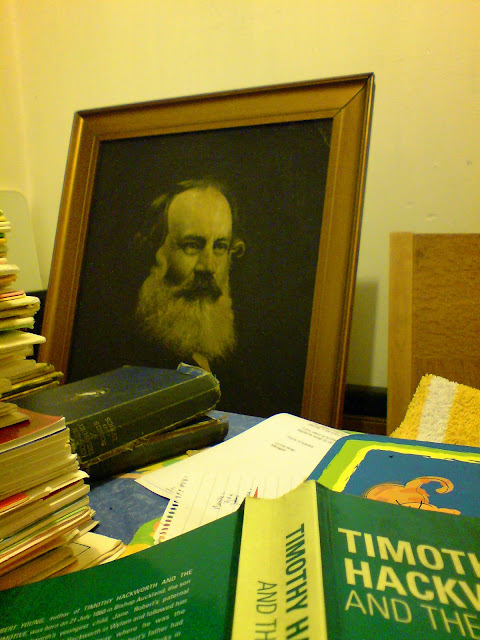 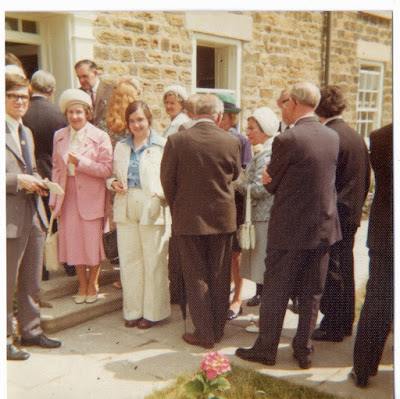 Joan Hackworth Weir (in pink) with Margaret Weir (in white) and Ulick Loring at the opening of the Timothy Hackworth Museum Shildon in 1975. 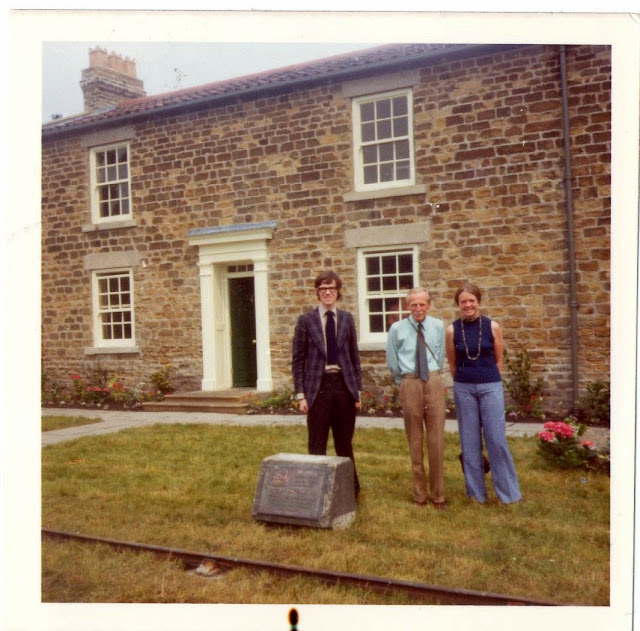