He Took a Locomotive to the Tsar but he is Forgotten Today!


Exactly 120 years ago last month (Ed's note - it's actually now 179 years ago now, in 2015) a 16 year
old English boy gave Russia her first railway train. He faced blizzards, wolves and misfortune and at the end of his journey, crowds cheered him, priests blessed him and he received the Tsar's congratulations. Yet today the Reds have rubbed the name of this remarkable lad from their history books, and hardly anything is known of him even in the west. With Soviet technical advances reaching new heights, and satellites spinning around the globe, the anniversary of his achievement is an opportune time to recall a story of courage and enterprise.

His name was John Wesley Hackworth. he was the son of  Timothy Hackworth, the man railway historians call one of the 'Fathers of the Locomotive", a pioneer of the great steam transport revolution in which Britain led the world. He grew up in a cottage beside the New Shildon workshops (England) where his father was chief engineer of the world's first public railway, from Stockton to Darlington, opened by Stephenson's Locomotion in September 1825. The railway company hired Hackworth Senior, a former colliery mechanic, at £150 a year, and agreed "to him a house and pay for his house, rent and fire". A modest, unambitious inventive genius, The Royal George, which restored the his directors faith in steam power when they were ready to scrap it as unsatisfactory and go back to horses. (Ed's note - it was the first to have the blast pipe, which helped to make it commercially viable). His renown Tsar Nicholas 1 to build a locomotive for Russia. it was needed for Tsarskoye Selo, the first Russian passenger railway, which thousands of peasant labourers were building from St. Petersburg (Leningrad0, 15 miles south to the Imperial Summer Palace as Tsarskoye Selo.
Hackworth built an important engine in 1827 called
gradually spread, and in 1835 he received at New Shildon, an order from

Hackworth made a locomotive to the familiar pattern of the day - illustrations show it having a tall funnel, slender, slender boiler, a single pair of large driving wheels with smaller pony wheels on each side, and an unprotected platform for the driver. Now comes the problem of getting it to Russia, across 1600 miles of ocean and wild terrain, before the northern winter closed in. 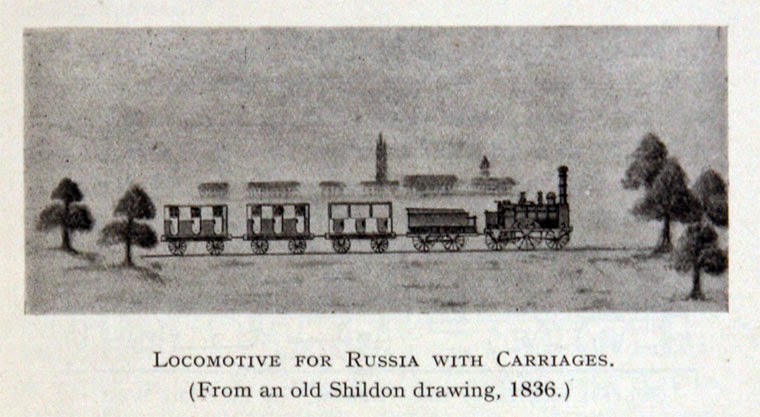 History is slender on the point but apparently Hackworth had no hesitation in placing his son in charge of theTzarskoselsky was opened before great crowds of cheering, gaping Russians who had never seen an 'iron horse' before. John drove his puffing, hissing, charge to Tsarskoye Selo where Tsar Nicholas, his family, politicians and generals, waited to see him arrive. Not that the opening of the first first railway in once Holy Russia was as simple as that - a score of Orthodox priests descended on the engine with crosses, candles, censers, and holy water to perform the blessing ceremony. "They splashed me in the process" Hackworth wrote in his diary. the Russians were proud of the Hackworth Locomotive No 1 - so much that they ran it only on Sundays and Holy days and used horses to pull the weekday trains.
fearsome task - transporting the locomotive, assembling and testing it at St. Petersburg, and teaching the Russians to drive. John, an apprentice at New Shildon, well built and mature looking, had just turned 16. He left England late in 1866, in company with a foreman, a few trusty workmen, and the 17-ton locomotive, dismantled and packed in three huge crates. In his pocket, he took the bill for their labours - £1884.2.91/2. Ice already covered the seas when they were forced to land at a lower Baltic port and transfer the cargo to great wooden sledges. The lumbering party set off on the journey that would take them across 500 miles of frozen, desolate country before the spires of St. Petersburg came into site. Blizzards nearly blinded them several times on the way. Wolves attacked on the edge of the forests and only by whipping the horse teams to a frenzy did young Hackworth and his companions escape the snapping jaws. It  could have an unnerving experience for a young fellow who had never been so far away from home before. He could hardly have been blamed if, after the first few days, he had decided to throw in the project and leave it to someone older and more experienced. But John Hackworth seems to have been a very self-sufficient young man and he took all his adversities in his stride. The conditions under which he had to live during his journey were far from the best; but the one thing in his mind was to discharge the trust his father had behind him, it was by no means the end of his troubles. Safe in St. Petersburg, he was called on to make a man-sized decision when a cylinder cracked during the assembling and not a workshop in the city could fix more than the common wheel. Coolly, John drew up a set of plans and sent his Foreman to the Moscow Armoury, 600 miles away, to have a replacement part cast. In November 1837, bells peeled in St. Petersburg, guns boomed and the

Summoned to the Court, John received Tsar Nicholas's congratulations for delivering the engine safely to Tzarskoselsky. Ironically, they said it would enable men to move about too freely, and it might assist rebellion.
Russia. His majesty remarked it was an occasion of great progress and other 'Iron horses' would surely spread across the nation. many Russian aristocrats had opposed the building of the

When the 75,000 mile Soviet Railway system celebrated its anniversary in November 1956, the name of Hackworth was not heard. Today it is the Russians who claim that they invented the steam locomotive, together with the bicycle, submarine, aeroplane, wireless, and all the rest. Maybe if the Hackworth's were living now Sputnik would be called 'Britannia' and carry, not the red Star, but the Union Jack."

Written by David Burke 1956 (Date and paper unfortunately not given).

Timothy Hackworth, 1830, was the first locomotive superintendent in the world. He built many of the first locomotives including the Sans Pareil, now (19560 in South Kensington museum, London, and invented 'exhaust up the funnel - blast pipe) to produce forced draught.

Notes - This typewritten paper by David Burke c November or December 1956, was sent to me by Ulick Loring, a descendant of Timothy Hackworth. Although there are no details about  David Burke on the paper or of where the paper was published, David, however, seems to have been associated with The South Kensington Museum of Science and Innovation, where they have or had items of  Timothy Hackworth. Perhaps he was the Curator! The occasion seems to have been the anniversary of the opening of the railways in Russia 1836 in which history was rewritten to exclude the role played by Timothy and John Wesley Hackworth and indeed the other British railway engineers who contributed to its birth. abut makes a great introduction to the site, David Burke laments the name John Wesley Hackworth has been lost to history - hopefully this site will go someway to ensuring John Wesley Hackworth is not forgotten! The paper was actually entitled John Hackworth's Russian Train but I have included his middle name as he was known as John Wesley Hackworth. David's source was Wm R. Hackworth in 1930, when he photographed the oil painting of  Timothy Hackworth in the South Kensington Museum of Science and Industry).